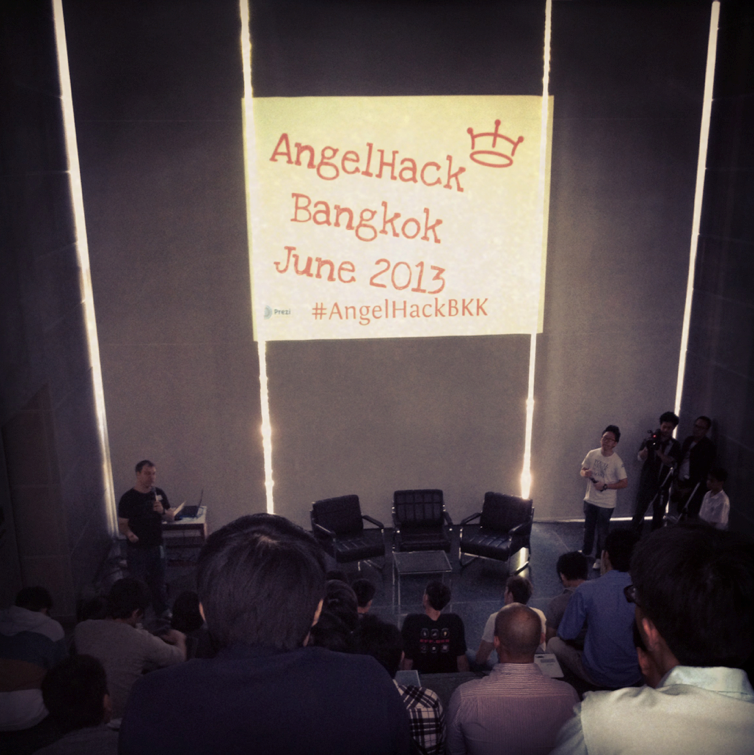 I had a chance to attend a first time AngelHack in Bangkok arranged on Sat 1 to Sun 2, June 2013, at the Bangkok University (Kluaynamthai campus). It was a fun event. Many developers, designers and businesspersons came to the event, around 70% are Thai and the rest are foreigners.

I got there around 10AM. People were still coming and registering. Things then quite went along according to the schedule. 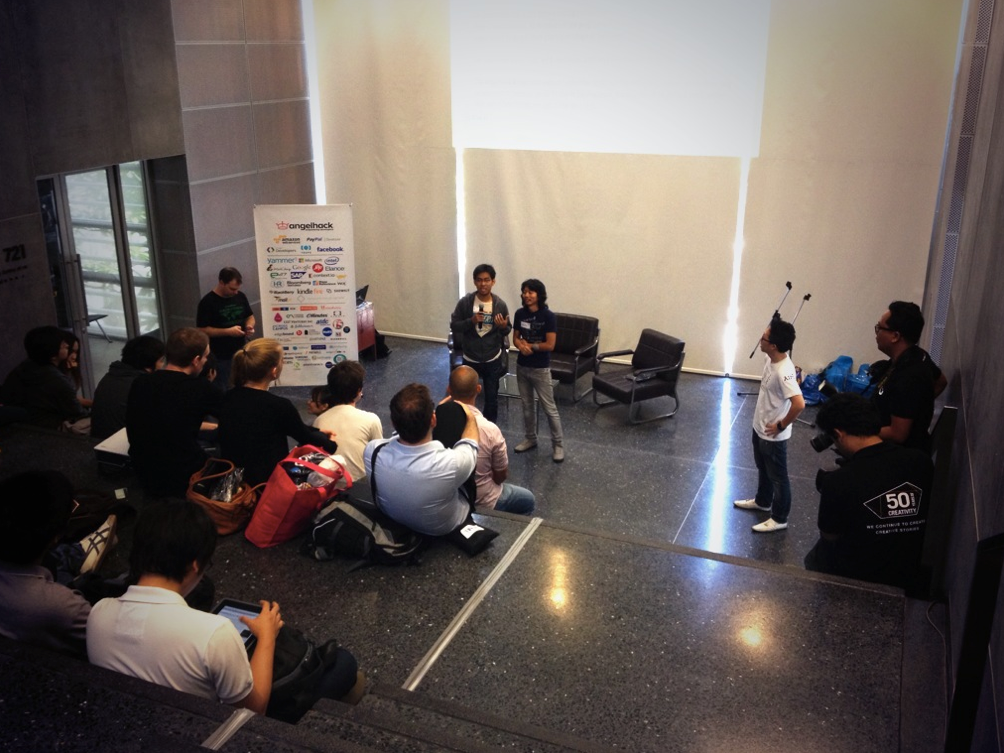 Teams that want to present themselves or need more members had a chance to pitch to audiences. Each team has 2 (eh, or 4 ?) minutes to talk. There were 5-6 teams did the pitch. One of them has a very interesting idea, they would like to create a location-based money tracking app.

Along with the pitching there were minigames awarding fun prices (Nerf guns, rubrics, geeky stuffs). I didn’t pitch since I thought I would go for it by myself. But it always fun to watch.

After the pitching lunch was served. And the hackaton silently began.

What I wanted to hack on is a web application that can search for tweets nearby by a keyword. It would be nice if we could get tweets that people are talking about traffic jam or raining. We could know these event’s locations. I named it Twitmap.

I did some planning before. I would go for a Rails apps. Nice ol’ friend Gmap.js for handling the Google Maps. And I would like to write my own Twitter API wrapper class (later I named it Poor man’s Twitter). Other stuffs are quite general. All I need was just bring them on together and typing. Luckily I got a company, @rhearnorth was helping me tackling down Twitmap. It was very nice working with him ;)

From Saturday 1PM we hackers begun each project. There was also a sponsor talk session from a Blackberry guy but I didn’t join. Too busy on coding. 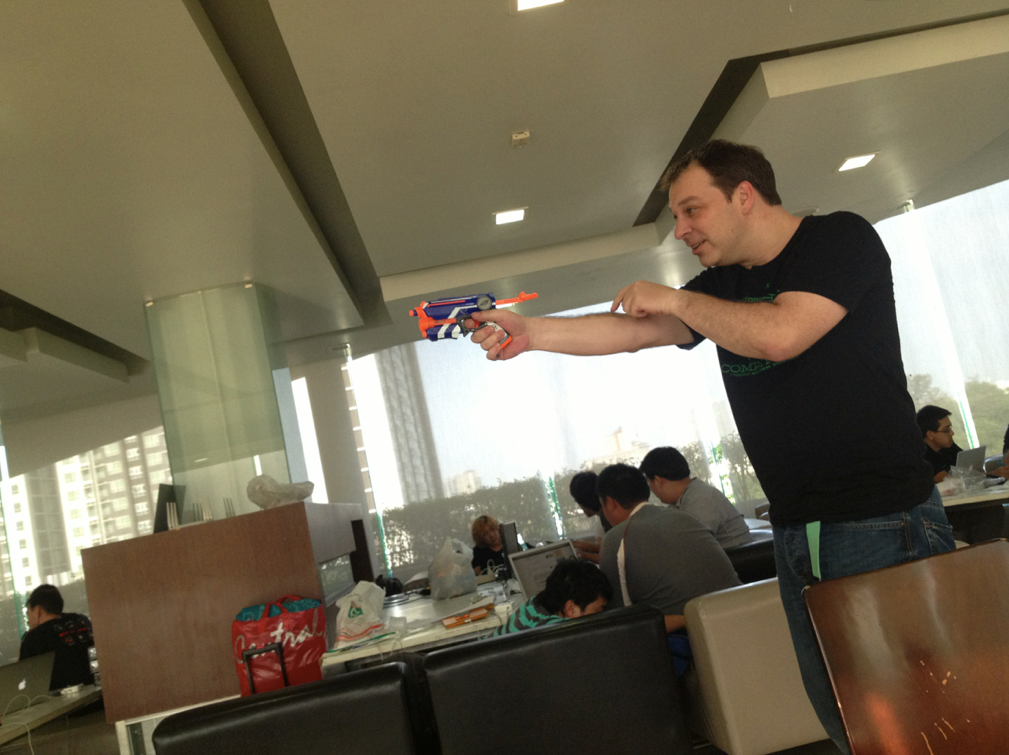 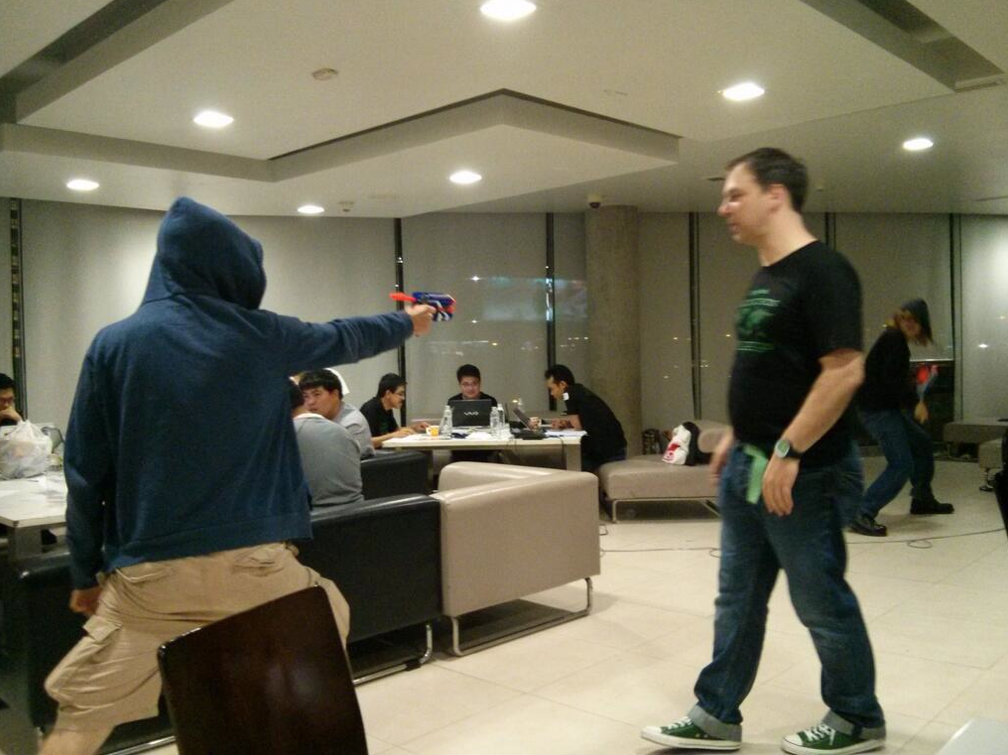 The event was arranged at BU’s Gallery (BUG building, really nice place to hack). The facilities were awesome, we have 3 rooms available for 24 hours, they were suppose to be a lounge at the 5th floor (that’s where gunfires happened), a lecture room and .. a theatre, on 6th floor. We were coding at the lounge. 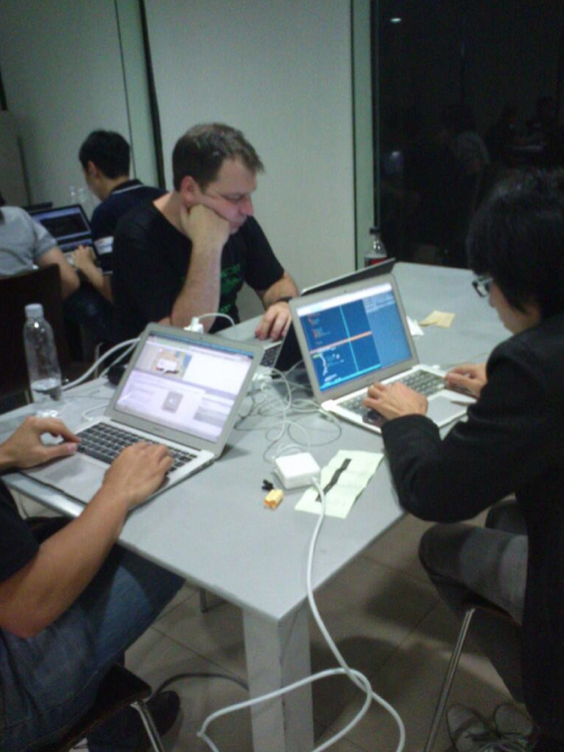 One thing to note here is if you want to stay over night. Please bring a sleeping bag or a blanket. BUG is painfully cold at night. Moreover, despite a fact that BU is a University, I’d say that BUG 5th floor has a perfect balcony to drink beers.

After 14+ hours of work, Twitmap has been launched to the internet for goods at twitmap.herokuapp.com (later I mapped her to twitmap.phatograph.com)

Here’s how we worked, the larger the black circle is the higher amount of commits.

And there came a presentation. There were 7 judges from different IT company and startups, both Thais and foreigners. The judges were separated into 3 groups. Each team had to present to each group of judges, 4 minutes for each presentation. Each group of judges would pick one team to compete in a final round. So there would be 3 teams presenting to all audiences in the final.

To be honest we didn’t prepare any presentation. And Twitmap herself wasn’t designed to grow any business. So we did quite a weird and awkward presentation. Basically what every judge asked about are quite the same. Here’re what we were asked about:

Obviously we didn’t make to the final round. And I’m sorry to tell that I couldn’t remember any much thing at the end. For me the hacking ended just right when Twitmap reached the Internet.

The event itself was well arranged, interesting and fun, but surely has a way to go forward. IMHO it would be nice if there were more technical sessions and presentation. Only couple of projects were presented to the audiences, would be great if we could know them all, but that takes time. Perhaps it would be nice if the event would be expanded to Fri-Sun. We would have more room for cool things.

There’re also sponsored prices, for example, this time Google Developer offered an awesome price and it wasn’t related to the grand price. So if you plan to win these sponsored ones. Building the apps that focus on their services gives you a better shot.

And to remind myself, for the limited working time like this, planning is very important. Sky is not a limit but your stamina is. I constantly coded for 10 hours and went exhausted (beers could help here ;) for real). If you plan for a big thing you may not be able to make it. Focus on the main feature, the rest are bonus.

Well, to sum up, a nice event, great facilities and support thanks to BU staff, awesome people all around. Thanks to everybody making this happen. I would definitely join #AngelHackBKK at the end of this year if I had a chance :)